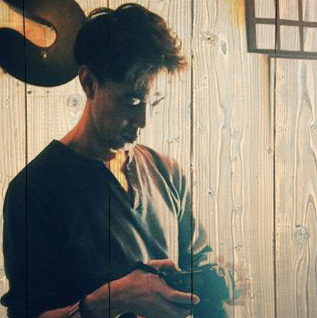 “How do you see this world?”

Yoshi was born in Okayama Prefecture, Japan, and now lives in Osaka

Graffiti was drawn on a street wall. When he first saw that graffiti, Yoshi was a junior high school student. He was too shocked to say anything. Thinking about it now, he realizes that it was the moment when he stepped into the world of expression.

Yoshi left college and began to explore photography. He studied photos at the long-established photo gallery DOT in Kyoto. He took landscapes photographs and portraits with a film camera. There were a lot of nice photos, but none of it impacted him like the graffiti he saw in those junior high days. He could not find pleasure in the confines of ordinary photography. This being the case, he decided to create his own images so that they would excite as that graffiti had.

In 2014, Yoshi found himself attracted to works made with multiple exposure. That discovery triggered the opening up of his world of expression, and he began to create works using digital cameras.  Ever since, he has maintained a distance from conventional photography, and instead takes pleasure in the creation of works of art such as paintings that are seemingly invisible in photos. His imagery sometimes represents a fusion of people and plants, sometimes the world captured by the camera’s own eye.

Yoshi’s work creates a unique world based on the two themes of blending the truth and expressing another world, and projecting a world that cannot be grasped by the human eye, asking the world questions.

Is the world you are looking at a real picture? This point of view also exists, but, as for you – how do you see? To Yoshi it may look thus and so, but what about to you? And so on….

Yoshi has created a style that impacts more than the shock he received when he encountered that graffiti and first stepped into his world of expression, in order to shock the people of the world.